Story of the Fund

Peter had an incredibly large circle of friends and family that supported him throughout his time in the Army. Once he reached Iraq, that support was even more evident, through countless acts of love that kept that huge smile on his face. Pete quickly became the envy of mail call. In addition to letters, he received the treats from home that aren’t available in a war zone. The selfless person that he was, Pete immediately wanted to share this love and support with his men.

Shortly before he was killed, Pete sent his family and friends a list of the treats his guys missed the most. Snacks of all kinds. Video games. Gatorade. Clean socks. Music. Movies. Magazines. Books. The things that 20-30 year olds miss from home.

Pete also included some items that would be helpful for the local Iraqis. He was a warrior, but his heart was strongest weapon. He knew that making friends and helping those in need, especially the Iraqi children, could do more to solve our world’s problems than anything.

When Pete was killed, many people asked if we wanted flowers or a donation. With no thought other than, “How do we keep Pete’s legacy alive?” we created the Peter Burks Unsung Hero Fund.

The “Unsung Hero” represents Pete’s ambitions and those of the thousands like him that serve our country. They don’t look for glory — it finds them. Pete received the “Unsung Hero” award from his high school football coaches for his unselfish play and unwavering support of his teammates, so the fund name represents this side of our hero.

We are continuously overwhelmed by the generosity of people from around the world who have supported the fund thus far. We have received thousands of dollars in donations, most of which is used for postage to ship the goods into war zones. In addition, we have received thousands of dollars worth of donated goods from schools, corporations, and individuals.

The fund is managed by Alan Burks, Pete’s dad, and Missy Haddad, his fiancée. There are no administrative expenses or salaries paid. Every dollar spent from the fund goes directly to the following actions:

Sending care packages to soldiers in Iraq and Afghanistan. This includes warriors on the battlefield, as well as those who support them like nurses and chaplains.

Providing humanitarian supplies for use in building connections with local citizens in Iraq and Afghanistan. School supplies. Soccer balls. Clothing. Anything that can help to close the gap of understanding between their young people and us.

Someday, if these needs have been met and there is still money in the fund, we will use whatever is left to provide scholarships for young people that want to learn from Pete and continue his legacy.

That’s it. Pete wanted to “take care of [his] guys” and “foment change in the world”. That’s what this fund is here to do, in his memory.
What the fund does

Peter was based in Camp Prosperity, inside the Green Zone in Baghdad. Since our start in December 2007, we have sent more than seven tons of supplies to soldiers on that base, and throughout Iraq and Afghanistan with money raised for the Unsung Hero Fund.

We sent so much that CPT Bryan Smith, the chaplain in Pete’s unit, established the “Peter Burks Country Store” on Christmas Eve, 2007. Here is the story CPT Smith wrote about the store:

The Store That Love Built:

On November 14, 2007, 2LT Peter H. Burks gave his life for his friends, the men of 4th Platoon, Palehorse Troop 4th Squadron 2nd Calvary Regiment. His family, fiancée, and friends were stunned and grieved by the news of Peter’s death. As a chaplain, I expected this response from those who knew Peter so well. It was what happened next that neither I nor the men of Palehorse Troop could have ever imagined. Peter’s family, his mom, Mrs. Jackie Merck, his dad, Mr. Alan Burks, his stepmom, Mrs. Laura Burks and fiancée, Miss Melissa Haddad, fought their way through their own personal grief and rallied an entire community to support our troops. We began to receive care packages in the mail from people in Texas, from towns and communities I had never heard of before, towns like McKinney, Frisco, Duncanville, Celina, and Garland. And the packages kept on coming. It wasn’t long before we had received over two hundred care packages for our soldiers. As I prayed and thought about how I could best honor the memory of Peter and show my appreciation to all those people in Texas whose cards and gifts kept coming in, it hit my mind that I should open a country store in Pete’s honor. So with the support of my commander, LTC Antonio Aguto Jr., we celebrated the grand opening of the “Peter Burks Country Store” at Forward Operating Base Prosperity here in Baghdad on Christmas Eve, 2007. Two hundred twenty-five soldiers came by within two hours and picked up food, clothing, hygiene products, and gift items from the store at absolutely no cost. We also gave out several door prizes that people had sent us such as: Xbox controllers, CDs, DVDs and CD players. We continue to open the store twice a week and soldiers can come by and get whatever they want for free. As I think now of the store, the sacrifice, and the love that 2Lt Peter Burks had for his men and the kindness of some people in Texas, I can’t help but weep. The Peter Burks Store truly is the store that love built.

Peter’s unit has since moved to a very dangerous region outside of Baghdad. CPT Smith still operates the store, and also hand delivers goodies to soldiers at other Combat Operation Posts (COPs). As you can imagine, these are not nice places to live, and every bit of love keeps the soldiers smiling. They are always thrilled to get a taste of home. 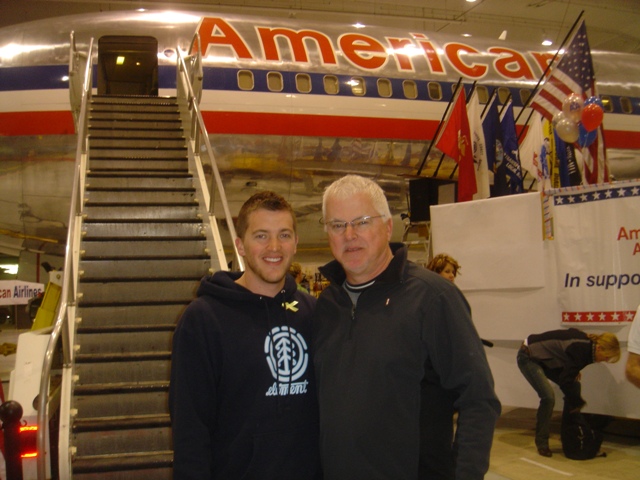